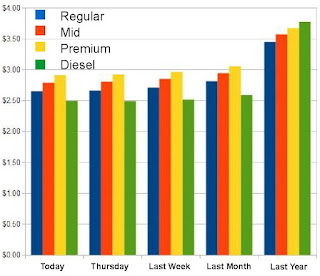 PROVO -- Gas prices continued their decline today falling to an average of $2.59 per gallon in the Provo area.

Still, average prices in Utah and other Western states remain the highest in the nation. Drivers headed east and south will find lower prices, according to AAA.

The lowest prices for regular gas were in Alabama, Mississippi and New Jersey where prices fell below $2 per gallon.

AAA estimated Thursday that consumers were spending about $350 million less per day on gasoline then they were a year ago.
Posted by davidbkennard at 8:37 AM