By David Kennard
The MORNING NEWS
dkennard@cableone.net
PARIS, France — As a kid growing up in Blackfoot, Paul Zilk had dreams like every other child.

He played in the high school band and was a varsity tennis player at Blackfoot High School. He even worked on the school newspaper for a time.

But on Sunday, the 1975 BHS student class president will stand on a podium before some of the world’s most notable entertainment industry leaders and be awarded one of the most prestigious honors bestowed by the French government.

The Ordre des Arts et des Lettres (Order of Arts and Literature) is given to individuals who have demonstrated significant contributions to the world of arts and literature.

France, considered by many as the center of world culture, presents the award to only a limited number of individuals every year.

And when the French Minister of Culture Christine Albanel pins the medal on the Zilk’s lapel Sunday he will join an exclusive group of entertainment and cultural leaders that include Martin Scorcese, Clint Eastwood, Bob Dylan, George Clooney, Bruce Willis, Leonardo DiCaprio, and many others both in and out of the spotlight.

“This is one of the most important honors of my life,” Zilk said from his office in Paris.
Zilk, the CEO of Reed MIDEM, one of the world’s leading tradeshow and events companies, is based in Paris. The company is responsible for three major shows devoted to television and music businesses.

Similar to the annual film festival in Cannes, France, which honors filmmakers and actors, Reed MIDEM focuses on the business side of entertainment and culture at events in Cannes and other locations throughout the world.

Zilk, who has lived in Europe for the last 21 years, the last five in France, said the honor he will receive on Sunday is made more special because of his early years growing up in Blackfoot.

He said a few key events took him from his small eastern Idaho roots to a life in international business. And, he said, he doesn’t mind standing as an example to young people who have a desire to persue similar dreams.

“We’re a humble town,” Zilk said of Blackfoot. “And maybe there is a kid out there who wants to do something more.”

During his senior year at Blackfoot High School, Zilk met up with a college student who he learned was going to Princeton University. Through a conversation Zilk learned that “for someone with good grades, there is another world out there.”

He spoke to his school counselors and decided he wanted to attend an ivy league school, he said. He chose Harvard.

When he entered college he said he wanted to enter politics, having always considered U.S. Sen. Frank Church (D-Idaho) one of his idols.

He worked as a college intern for Gov. Cecil Andrus in Boise, but eventually changed tracks and entered Harvard Business School.

After graduating with an MBA degree, he worked in various marketing positions for several notable companies in the U.S.

From 1992 to 2000, Zilk headed the international business of the National Basketball Association (NBA), where he established and managed NBA offices throughout Europe, Asia, Latin America, the Middle East and Australia, according to his public biography.

“When I talk to kids that’s what they like the most,” he said.

He has worked in his most recent position with Reed MINEM for the last seven-plus years in France, where he has raised his family.

“My wife is French, my kids are French, but I never forgot what happened to me,” Zilk said.

He said he has fond memories of growing up in Idaho, where he attended Jason Lee Memorial Methodist Church with his family. “We still consider that our church.”

He said the high honor by the French government is exciting for him, not so much because of the prestige, but more because he remembers how a chance encounter sparked an interest that lead him to a life he never dreamed of as kid growing up in Blackfoot.
Posted by davidbkennard at 4:18 PM No comments: 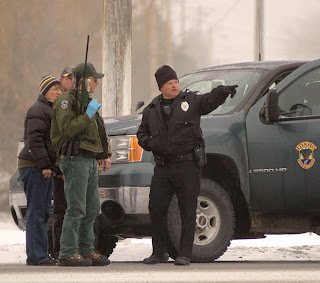 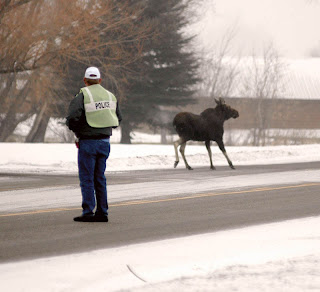 Story and Photos By David Kennard
the Morning News
dkennard@cableone.net

BLACKFOOT -- Police ended a six-hour standoff with a moose Tuesday along Airport Road in Blackfoot when the animal vanished into fields east of the Blackfoot Golf Course.

AT RIGHT, Blackfoot COP officer Delbert Brown watches traffic to make sure the female moose wasn’t a hazard. Blackfoot Police and Idaho Fish and Game officials talked about how best to tranquilize the moose so they could transport it back into the wild.

Jason Beck with Fish and Game in Pocatello said officials would continue to watch for the animal in the next few days to ensure it stays away from residents.

“We want to keep the wild things in the wild,” he said.

He said it is not uncommon for moose to venture into the area from their natural habitat along the Snake River or the hills east of Blackfoot, although he said it was difficult to say where this moose came from.

Police and Fish and Game urged residents to keep away from the moose.
Posted by davidbkennard at 3:44 PM No comments:

"ISP is requesting that travel on all interstates, U.S. highways and state highways be limited to essential and emergency traffic only," officials said in a statement issued Tuesday night. "Road conditions are extremely treacherous throughout eastern Idaho. There are multiple slide-offs throughout the regions."

Weather forecasters Tuesday said conditions should improve today with temperatures rising into the mid-30s, but drivers were urged to use caution as winter driving conditions were expected to return at night and into Thursday with the arrival of another storm system.

Jeff Hedges, a meteorologist with the National Weather Service in Pocatello said the mixed rain and snow and freezing drizzle that turned local roads into ice was uncommon for the Snake River Plain.

"It's a mess," Hedges said. "Just a thin film is all it takes to make things very slick."

Accumulation in the valley will be very light, Hedges said. Up to an inch was expected Tuesday night, with much more expected at higher elevations.

Skiers headed to local resorts will find plenty of fresh snow — if they can get there. While roads will be very slick to all the eastern Idaho resorts, once there, skiers will find several inches of fresh snow in the coming days.

Kelly Canyon reported 4 inches of new snow in the last 24 hours and forecasters are calling for more leading up to the weekend.

Grand Targhee was reporting 6 inches in the last day after getting dumped on Saturday when the resort measured 13 inches of snowfall. Again forecasters are calling for more snow on Thursday and Friday, but drivers should use extreme caution driving on mountain roads.

Current road report information, including road closures, can be obtained online at 511.idaho.gov, or by calling 511.
Posted by davidbkennard at 3:36 PM No comments: