Posted by davidbkennard at 1:26 PM No comments: 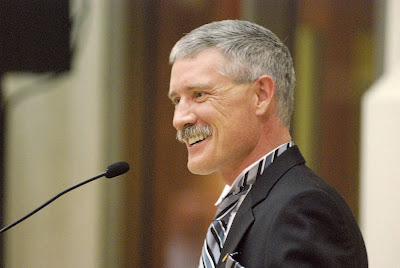 The president of Premier Technology was honored as the University's Idaho Business Leader of the Year, an award bestowed by the school since 1959.

Sayer is the owner of Premier Technology in Blackfoot.

In the last few years the company, which employs about 350 people, has seen continued growth in designing and manufacturing high quality equipment for industries from mining,
chemical and pharmaceutical manufacturing to the departments of Energy and Defense, and become a recognized leader in the nuclear industry.

Speakers attending the festivities under the rotunda of the L. E. and Thelma E. Stephens Performing Arts Center said Sayer was the ideal recipient on the 50th anniversary of the award.

Sayers thanked those who spoke about his accomplishments, but said he looked at the award not as recognition for past work, but as an assignment to inspire future business leaders -- especially those attending the College of Business at ISU.

He said it would be the task of today's students, as well as business leaders to lift the nation out of its current economic woes.

Speaking about the economy, Sayers said, "I won't use the 'R' word. ... I'm calling this a depression."

He blamed the economic climate on the fact the "America has become a nation of consumers," and said waiting for the government to solve the problem was not a solution.

"The rest of the country is looking to us to solve the problem," he said indicating that Idaho was an example of hard word and integrity.

"This country was built on the backs of people who left their home country," Sayer said. "I know that DNA still exists in our country today."

He said Sayer was in good company, acknowledging those who had been honored by the school in the past.

"Most (of the awards) are given when they (recipients) are gray and past their prime," Bird said. "Well you are gray, but you are not past your prime.

"As great as the accomplishments are today, they will be even greater in five or 10 years from now."

During his remarks, Sayer thanked those who came to support him, including family members and company customers. He also gave credit to the people in his company.

"It is not what I am or what I've done that makes this special," he said. "but those that have spent time supporting us."
Posted by davidbkennard at 1:11 PM No comments: 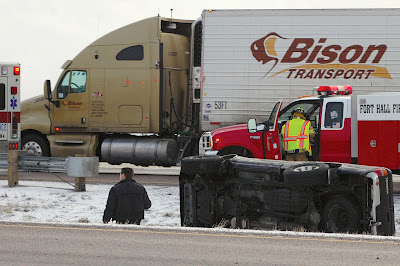 The Morning News / David Kennard
Emergencey crews work on the scene of a rollover crash Sunday at the south Blackfoot Exit on Interstate 15. No one was hurt in the crash.

By DAVID KENNARD
dkennard@cableone.net
BLACKFOOT — Emergency crews responded to several crashes Sunday night following the light snow that fell in the area.
The precipitation dropped wet snow late in the day that combined with sub-freezing temperatures as the sun went down to make roads extremely slick.
Bingham County Sheriff’s deputies responded to two crashes within about an hour of each other at the south Blackfoot exit.
No injuries were reported, but one single-vehicle crash totaled a Toyota pickup truck that rolled off the road just north of the overpass.
Bingham County emergency dispatchers said local law enforcement officials were busy responding to multiple -- but minor -- crashes.
Blackfoot Fire Department officials said they were called to the scene of several crashes, but no one was seriously hurt on slick roads Saturday night.
The National Weather Service said local drivers could expect to see slick roads through the day today as a winter weather system moved through southeast Idaho.
Meteorologist Jeff Hedges with the National Weather Service in Pocatello said a winter storm warning was issued for the mountains south of Pocatello through Monday. The storm was expected to drop as much as 10 inches of snow in the high country.
Hedges said up to 2 inches of snow is expected to fall locally today and tonight before clear weather arrives sometime on Tuesday. He said the next chance for measurable accumulation would be Sunday.
Posted by davidbkennard at 4:40 PM No comments: