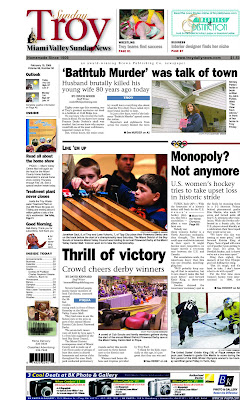 Posted by davidbkennard at 4:47 PM No comments:

To Cub Scouts that’s the equivalent of the Daytona 500.

I’ll be the first to admit that I don’t know much about racing or cars in general, but I do enjoy helping kids build Pinewood Derby Cars.

I suppose I first felt the racing bug when I was about 8 years old.

We had just moved to town and I joined a Cub Scout group that met near the elementary school once a week.

Back in those days it was still OK for a third-grader to walk to school.

I’d walk three or four blocks, then a bunch of us would walk another mile or so to Mrs.

As I remember it seemed like I did a lot of walking back then.

I’m sure it wasn’t because gas was expensive or anything like that.

In fact, I remember my dad complaining when it went above 50 cents per gallon.

“That old Rambler is getting too expensive to drive,” he’d say.

Dad was the kind of guy who bought new cars, took care of them and drove them until they finally died.

I remember him one time complaining that the only new car he could find for under $3,000 was a Chevy Vega.

He complained a lot about cars, now that I think about it.

But we kept that old brown twotone Rambler until it was replaced by a new Ford Country Squire wagon.

Man alive was it sweet.

I’d help Dad change the oil and put air in the tires and stuff like that.

It was pretty cool to lift up that giant hood.

A little guy like me could practically sit inside that humungous engine compartment.

The Country Squire met its demise quite a few years later when some dumb teenage kid — me — wrecked it into some bushes off an icy road.

Dad sold it to a friend from work for $1.

The Vega had quite a different end.

Dad drove it to work and back every day, but stopped on his way home for something or another — probably at the hardware store.

He was always stopping at the hardware store.

We had more sink washers and mismatched screw drivers than probably even the store itself.

Anyway, as Dad tells it he parked on the street next to the curb on a windy day when the limb from a giant old maple came crashing down on the car.

The insurance company said it didn’t cover acts of God.

So the Vega was replaced by a shiny new Ford Fairmont.

Dads and cars seem to go together.

That’s probably a chauvinistic thing to say, but some gender roles are pretty long lasting, I suppose.

When I brought that first Pinewood Derby car home, Dad said he’d help me with it.

Between the two of us we came up with a pretty strange looking car.

I didn’t have a pocketknife, so the whole thing was done with a steak knife I smuggled from the kitchen drawer.

Dad showed me how to wrap a piece of sandpaper around a block of wood to make it easier to take out the big scratches.

We drilled out the bottom, poured in some lead that we melted in a tuna can on the Coleman camp stove, then took the tiny car down to the post office to have it weighed.

After a week of tinkering with it, we had it to the regulation weight and ready to race.

It took first place and I took home a new pocketknife, and whole lot of respect for my dad.

He’s not driving anymore, but I heard my Mom bought a new car not too long ago after the last one finally gave out.

With four kids of my own, I’ve had pine shavings on my garage floor and old tuna cans sitting on my work bench for years.

My youngest joined Cubs this year, so it looks like I’ve got only a few more derby years left.

See you at the races.

David Kennard is the executive editor and publisher of the Troy Daily News. You can call him at 440-5228 or send him e-mail at kennard@tdnpublishing.com.

You can watch a Pinewood Derby race at 10 a.m. Saturday at the Miami Valley Centre Mall in Piqua.
Posted by davidbkennard at 1:25 PM No comments: