April 21, 2009 -- River on the rise: Officials forecast even higher water in coming days 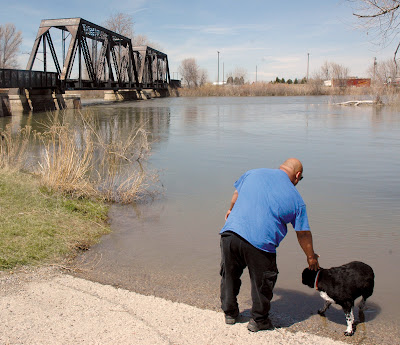 The Morning News / David Kennard
Mario Martinez of Blackfoot spends a sunny afternoon at the water’s edge near Twin Bridges park on the Snake River west of Blackfoot. The river has been rising as warm temperatures melt snowpack in the high country.

BLACKFOOT — If you’ve driven across any of the bridges west of town recently you’ve seen some pretty high water.
Spring thaw in the high country has sent water into tributaries and reservoirs at the headwaters of the Snake River.
As reservoirs fill, water managers are forced to release water so they can accept more snowmelt.
Forecasters are calling for more warm weather in the valley in coming days, but said temperatures will remain cold during the night, which will slow the release of water.
National Weather Service officials said Friday they expect the Snake River in Blackfoot to rise to 9.63 feet sometime on Sunday. The river is considered to be at flood stage when it reaches 10 feet.
At the current rate, local residents could see water in low lying areas in the next few days, but NWS forecasters said they expect river levels to drop slightly at the beginning of the new week.
The National Weather service monitors the water level remotely from a United States Geological Survey station near the twin bridges west of Blackfoot.
Similar stations are located all along the river.
The stations help water managers determine how much water to release from local reservoirs to both keep the water in the channel and keep the reservoirs as full as possible heading into the hot summer months. 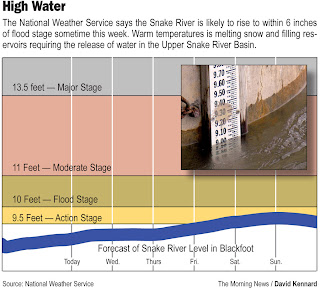 Posted by davidbkennard at 3:18 PM No comments: 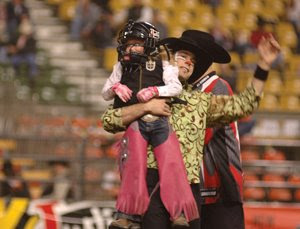 Photos By David Kenard
Rodeo action
ABOVE: Saydee Arave from Shelley gets a lift from Dusty Tuckness Wednesday at Holt Arena after her ride in the Mutton Bustin’ event on opening night of the Dodge National Circuit Finals Rodeo. The rodeo brings top contenders from 12 circuits to compete at the three-day event. The rodeo runs through Saturday.
Posted by davidbkennard at 7:30 PM No comments: 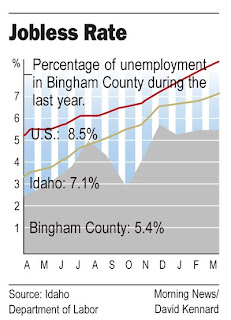 BLACKFOOT — Bad economic news continues to pour in across the nation, but here in Bingham County, residents got some news that for a change wasn’t bad.

For the first time in more than a year, the unemployment rate didn’t go up in Bingham County.

Standing at 5.4 percent, the jobless rate is still much higher than it was a year ago (3.3 percent) but local experts see the report from the Idaho Department of Labor as confirmation that the local economy is much different than it is nationally.

Bird said Friday that much of the success in Bingham County comes from regional economic development initiatives.

In his address Friday at the Community Economic Development Forum, he said wooing new business to the county is the “sexy side” of his job.

“But the real work is growing existing business,” Bird said. “Sixty-five percent of our work is helping existing companies grow.”

The monthly jobless report came on the same day that the national unemployment rate rose to 8.5 percent, the highest rate in more than 25 years.

And statewide, the unemployment rate rose to 7.1 percent, up from 6.8 percent a month earlier and 4.1 percent a year ago.

According to Bob Fick with the Idaho Department of Labor, Idaho’s economy had not lost jobs between February and March since World War II.

“Unemployment benefits payments approached $60 million in March, intensifying the pressure on the state’s Unemployment Insurance Trust Fund,” according to a statement released Friday by Fick’s office.

And he said, according to department analysts, there is little evidence to suggest Idaho’s employment picture will improve in the next several months.

Friday’s report showed the Bingham County outperformed neighboring counties which all say an increase in unemployment.

Bannock County saw its jobless rate climb from 5.6 percent to 5.8 percent during the last month. And Bonneville County climbed to 5 percent, up only slightly from 4.9 percent a month ago.

The unemployment rate in every county was higher in March than a year earlier with 21 of Idaho’s 44 counties recording a rate decline from February. Clearwater County had the highest rate at 16.5 percent. Other double digit counties were Adams at 14.9 percent, Benewah at 15.9 percent, Shoshone at 11.6 percent, Boundary at 12.8 percent and Valley at 12.4 percent. Only three Idaho counties reported double digit rates in March 2008.

Just two counties posted rates at or below 4 percent last month. Owyhee County had the lowest rate at 2.9 percent, and Teton came in at 3.9 percent. A year ago, 23 counties had rates below 4 percent.

According to labor officials more than 6,500 manufacturing, primarily in high technology, and 8,300 construction jobs were lost over the past 12 months along with 9,400 transportation and warehousing jobs, 8,600 jobs in professional and business services and 2,600 in leisure and hospitality, mostly in restaurants and bars. The limited bright spot was 1,900 new jobs in health care.
Posted by davidbkennard at 2:18 PM No comments: