It’s now a scientific fact that prayer has no benefit.

You may have seen the news story the other day that told of the most scientific study ever conducted on the matter of prayer.

Groups of god-fearing people were asked to pray for various sick people and then scientists watched to see what happened.

In one case, a majority of sick people actually got worse. The sickly people in the other groups showed no benefit from those soliciting the heavens for their speedy recovery.

The conclusion is that God does not answer prayer. When I was shopping for cars a year or so ago I spoke to a bunch of car dealers. I visited the local lots, Erwin, Arbogast, Troy Ford, even talked to some folks outside the area.

The Dodge dealer told me that Chevies and Fords were no good.

The Chevy folks told me not to waste my time on Fords or Dodges.

What I learned is that despite what the Ford man may have thought, he was not an expert on Chevies.

When I finally did settle on a car, I discovered the best source was not the guy down the street peddling his own brand.

Without trying to sound too much like a Sunday school teacher, I’ll say that scientists will never be able to prove the existence of God.

Nor should they, although I do give them credit for spending our tax dollars on the subject.

There is a little thing called faith that plays into the whole talking to God thing. Offering prayers and monitoring the results really is the opposite of that.

I consider myself a church-going man. I’m there almost every Sunday, singing the hymns, shaking the hands, straightening my son’s tie and tucking in his shirt.

I’ve even been known to offer prayers once in a while.

By no means would I consider myself an expert on the subject of prayer. And I’ve certainly never put it to a scientific test. I know enough about the man upstairs not to test him. You may remember what happened to the king of Egypt when he tried that.

The lesson there was to be careful what you ask for. Moses let him have it.

My feeling is most people pray pretty often, and I don’t mean, “Please God, don’t let my boss find out,” or “Holy (expletive deleted), now what I am I going to do?” The most effective prayers are offered not out of desperation, rather they are offered with foresight and hope.

For instance, how do you feel when your son or daughter comes to you and says something like, “Uh Dad, I’m really sorry, but I have to tell you something.” My guess is, God feels the same way. “Oh man, here it comes.

What’ll it be this time: pillar of salt?, belly of a fish? Plagues and locusts, I haven’t tried that in a while?” I’m also pretty sure that God’s looking at a much bigger picture than we are. A few prayers offered in a scientific study may look good in headlines and a handful of scientific journals, but I’m sure it counts little in the book of eternal salvation.

In fact, you can find the “Praying to God doesn’t work” story online.

Below the story you can find the related stories: “The hardcore ‘Penthouse,’ yours for $100m,” “U.S.

Mint forks out $9 million over sexual harassment of staff,” and “One man and his bestseller: the dog that ate America.” God’s in good company. It’s no wonder he’s put us all on call waiting.

David Kennard is the executive editor and publisher of the Troy Daily News. You can send him email at kennard@tdn publishing.com.
Posted by davidbkennard at 1:16 PM No comments: 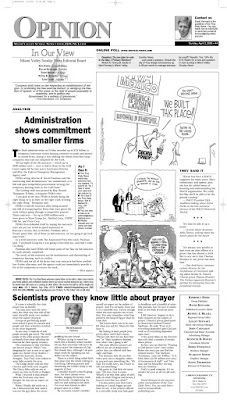 Posted by davidbkennard at 11:32 AM No comments: