It’s hot in Iraq this time of year.

There are more than 130,000 U.S. troops stationed in the desert nation this Memorial Day Weekend.

They will celebrate with services today, speeches tomorrow, but many will mark the American holiday by doing what they have been doing for the last three years, going door-todoor, helping the people of Iraq, rebuilding infrastructure and training

Iraq’s citizenry to care for themselves.

The nation’s prime minister said this week that the country will be ready to defend itself from internal threats by the year 2007.

We can only hope that means some of those 130,000 U.S. troops will be coming home soon.

It’s hard to know for sure how many of those are from Miami County or even from Ohio. The military doesn’t give very detailed information about who is serving where at any moment in time. Most families don’t really even know where exactly their soldiers are serving.

Three or four times a week, I have a chance to visit with a soldier’s family member as they update me on what is happening with their son or daughter.

Many are in Iraq, some in Europe, many more are stateside training.

We publish the information on the Hometown Heroes page about once a week in the Troy Daily News.

Most of the news is good, thank God above. I never served in the military.

At 18 I registered for the draft as required by law, but of course the Cold War wasn’t a time of active recruitment.

I do know several people who have served, some work on our staff here at the Troy Daily News.

Anthony Weber, photo chief, is an Army veteran, and Ken Bowen, circulation director – the guy who makes sure this paper is delivered – is a veteran.

Both served their time and now are home and living their lives. I’m thankful for their service to my country.

During spring break, I had a chance to visit with one of my uncles.

Richard, my dad’s youngest brother, is starting to get up there in age now, but he remembers vividly the time he served his country. As a young helicopter pilot, he flew evacuation missions into the jungles of Vietnam.

Many wounded soldiers were carried out under the blades of his HH- 3E Jolly Green Giant.

“You can land about anywhere in those,” he told me. “But it’s a lot more difficult when the enemy is firing up at you from the forest.”

I can only imagine.

Further back, my mom’s dad fought in the trenches of Belgium and France during World War I. My great-great grandfather served with the Union Army in the Civil War. He was wounded in battle, taken prisoner in Georgia and later released back to his home in southern Ohio.

His grandfather fought for American freedom during the Revolutionary War. My oldest son, finishing is junior year in high school, has been heavily recruited by every branch of the military.

It worries me some what he may be thinking. Although I would be very proud to have a son serving in the military, to be honest, I hope he chooses a different career path.

It’s hot in Troy this time of year.

As you read this, I may very well be cooking hamburgers and hotdogs in Troy’s Community Park.

I imagine most of you will be doing something similar. In fact most of the country is celebrating this extended weekend with picnics and family vacations.

But as you enjoy yourself this weekend, take just a minute to appreciate those young men and women celebrating this holiday far from home.

Take a minute to think about how your life has been touched by a soldier – family member or not.

On Monday, I hope you’ll make it out to Troy’s Memorial Day parade. It begins at 9:15 a.m. and travels through the Public Square west to Adams Street, where it ends at Riverside Cemetery with a short service.

David Kennard is the executive editor and publisher of the Troy Daily News. You can send him e-mail at editorial@tdnpublishing.com.
Posted by davidbkennard at 12:47 PM No comments: 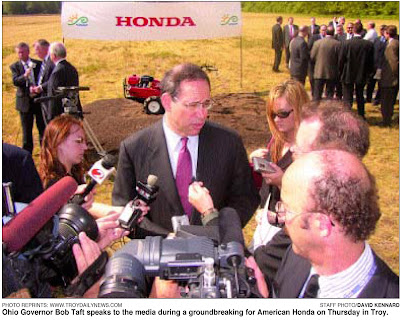 Posted by davidbkennard at 4:36 PM No comments:

My mother grew up in a small wheat farming town in the middle of nowhere Kansas.

Her father was a World War I veteran and fought in the trenches of Germany and Belgium. He later came home and began working as an electrician, installing electric lights in most of the homes around the prairie farming community of Delphos, Kansas.

My mother’s mother was a vegetable gardener who grew more in her quarter-acre garden than you can find in the Meijer produce section.

Although my mother grew up as a country girl in a small town — with a town square complete with a statue of Abraham Lincoln and a gas co-op — she wasn’t afraid to look out at the big wonderful world beyond the banks of the muddy Solomon River and the grain elevators that marked the edge of paradise.

After high school she became a Jayhawk at the University of Kansas, where she got her teaching degree — her ticket out.

She left the rolling plains of the Midwest for the Navajo Indian reservations of New Mexico. She taught school to the young Shiprock Navajo children, most of whom either walked to school across the desert country or arrived in the back of old pickup trucks.

A few years later she fell in love with a handsome young electrical engineer who worked wherever his company sent him to build missile silos for the U.S. government during the early stages of the Cold War.

I showed up a few years later and lived in Wyoming, California, North Dakota, Arizona and finally Colorado, where Dad finally found a job building skyscrapers and public utility plants.

Mom, of course, came along for the ride, never working again after those few years of teaching Navajo children.

She taught me how to love the Denver Broncos even before the John Elway years — you know, the bad years.

She was a stay-at-home mom during the rise of the women’s liberation movement. I was 8 and loved flying kites, finding frogs and turtles and watching Saturday morning cartoons.

When I was 10 I convinced her to let me have a paper route. Most of the time until I was big enough to load up the 60 or so papers on my bike, she’d drive me around the neighborhood in our old brown Rambler.

We’d take that old Rambler on family vacations back to Kansas to see grandma, work in the garden and dig thistles out of grandma’s pasture land that she leased to a neighbor to run cattle on.

Forty acres of virgin Kansas prairie holds lots of thistles. It was usually a two-day job to cover all the ups, downs and cow ponds.

We’d take meat sandwiches, cantaloupe and a jug of ice water for a picnic in the tall grass and shade of the cottonwood trees.

The mosquitoes were always bad in August, but mom and grandma would work up a smudge fire to keep them away while we rested under the blue sky. We’d head back in the late afternoon and I’d help grandma snap beans or read old Pogo comic books that she kept in an upstairs cedar chest.

Grandma didn’t own a TV, so we’d entertain ourselves by playing outside games or chasing fireflies.

Grandma’s gone now, but mom’s still around. I don’t talk to her as much as I probably should. She sends letters and I enjoy reading them, but I don’t write back nearly as much as I should.

When I do, I try to tell her thank you for taking care of me and raising me right.

She taught me a lot of things, but mostly I think she taught me to enjoy life and find adventure wherever I am, even if it is in a small town somewhere in the Midwest.

David Kennard is the executive editor and publisher of the Troy Daily News. You can contact him at 440-5228 or send e-mail to editorial@tdnpublishing.com.
Posted by davidbkennard at 1:06 PM No comments: 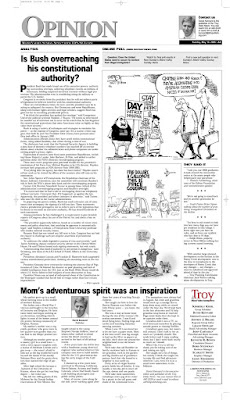 Posted by davidbkennard at 11:36 AM No comments:

Posted by davidbkennard at 5:13 PM No comments: