Warm weather returns for the weekend

PROVO – Forecasters are calling for summer through the weekend.
The National Weather Service said Utah Valley residents will see temperatures near 80 Friday and near 90 on Saturday and Sunday.
Skies will clear and sunny ...
Posted by davidbkennard at 11:00 AM No comments:

This column was originally published April 28, 2015 in the (Provo) Daily Herald

A few months ago, I was walking through downtown Salt Lake City with my son, Noah.

We had taken the FrontRunner up from the Orem station to go see a movie at the theater at the Gateway Mall. It was a Saturday afternoon and he was up for an adventure.

After the movie we walked over to Temple Square, on our way passing behind the Salt Palace, which was just tearing down from the Outdoor Retailer Show. We had to dodge dozens of fork lifts, which were working to move literally thousands of Buick-sized wooden crates from inside the show floor to stacks that lined at least two city blocks.


Each crate was labeled with the brand of some outdoor equipment manufacturer: Patagonia, The North Face, Camelbak, Salomon, Yakima, and countless more.

Crates stacked 20 feet high made it feel as if we were walking through some slot canyon in southern Utah.

We were both amazed by the volume of merchandise and the number of different band names brought in for the show.

During the last few decades, Utah has firmly established itself as a leader in outdoor recreation, the number one sector in the state’s tourism industry.

From branding campaigns such as “Greatest Snow on Earth” to “Life Elevated,” Utah has done an excellent job of telling its outdoor recreation story to the world.

On page A6 of today’s Daily Herald, you’ll find a story by reporter Karissa Neely who reports on recent numbers released about our state’s tourism industry.

She learned that tourists spent a record high of $7.5 billion during 2013, with $6.4 billion of that spent by out-of-state visitors.

Those are big numbers.

Those are also good numbers for our local economy because of the compounding effect of those dollars in the form of related jobs and local businesses.


We hear complaints from time to time that Utah has done too good of a job marketing our peculiarity. It is getting harder to find places where you can get away because too many people have discovered our secret places.

A few years ago my boys and I created a Google map that labeled some of our favorite places, places where we had been hiking or camping or fishing or just hanging out. We’ve got a spot on Morro Bay in northern California where we spent an afternoon poking star fish in the tide pools, another on Rehoboth Beach on the southern coast of Delaware where we threw french fries to sea gulls as they hung in mid-air in the ocean breeze.

But most of our spots are here in Utah. From Bear Lake to the Four Corners, we’ve been lucky enough traverse the Beehive State and see many of its wonders.

We’ve not quite made it to all of the “Mighty 5,” but we have checked off Zion, Bryce and Canyon Lands, although to be honest we only saw a piece of Canyonlands National Park from the bottom of the Labyrinth Canyon during a canoe trip along the Green River. And the trip to Bryce Canyon National Park was marred by an impromptu alternator repair job in the campground. The kids got to see the park while I spent several hours under our Dodge van swearing at various engine parts.

One of my favorite trips was a weekend backpack trip I made with my then 8-year-old daughter into some high mountain lakes in the Uintas. We still have the bright pink backpack that she had to have before we left the sporting goods store.

I can’t tell you how much money I’ve contributed to the billions of dollars collected each year by the tourism industry, but I will say I’ve done my part.

Daily Herald executive editor David Kennard can be reached at 801-344-2530 or dkennard@heraldextra.com or on Twitter @davidbkennard.
Posted by davidbkennard at 12:00 AM No comments:

This column originally appeared in the April 21, 2015 edition of the (Provo) Daily Herald

Veteran Daily Herald reporter Genelle Pugmire found herself in the middle of a breaking news situation Tuesday night in Provo when the City Center was locked down by police and SWAT members.

Our key editors had just dismissed from our daily afternoon news meeting to finalize what news stories would go online and what would be in print the next day when we heard police dispatchers talking about a man with a gun.

If you’ve ever visited our offices — and you are always welcome to come in — you’ve heard the police scanner squawking away. Mostly its conversations are about minor traffic crashes or other non-emergency situations.

As journalists, we screen out most of the chatter. I’m pretty sure I’ve honed those skills from an early age. While growing up my mother would listen to her little battery-powered transistor radio that she carried in her apron while she puttered around the house. It was always tuned to talk radio, Denver Broncos game analysis or chart-toppers such as Glen Campbell, Dionne Warwick and other easy listening favorites.

But when we heard the words "gun," "bomb" and "mayor’s office" in the same sentence, almost in unison everyone in the newsroom said, “Did you hear that?”

A quick call to the Provo Police yielded only a busy signal. We immediately sent a photographer and a reporter to Provo’s City Center.

I sent a text message to Genelle asking where she was at that moment. A minute or two later she called and said police were locking down the third floor of the City Center after a report from police that there was possibly a man with a gun and a bomb in the building.

Genelle was covering the regular Provo Municipal Council work session when all of this started happening.

“I was on the phone with you when an officer with an AK-47 came in and said we needed to evacuate the building right now,” Genelle later told me.

I told her to stay safe and record everything that was happening.

Another call came in from Barbara Christiansen, who was the first reporter on the scene outside the building. She reported that crews were shutting down streets about two blocks in every direction — including the streets around the Covey Center for the Arts, where a group of young children was attending a dance class.

By that time we had already had an initial news story posted to heraldextra.com and were working on updates as fast as possible.

Genelle (@gpugmire) was tweeting as rapidly as possible, despite being assisted out of the building by police and Mayor John Curtis.

After the first 15 minutes or so, the chatter on the police scanner begin to take a less excited tone, indicating things were beginning to come under control. We began to think maybe it was a prank call. It later turned out it was actually a false alarm and police are now investigating the caller.

By early evening we had crafted a fairly detailed story about the situation. The question then became, “How do we play this in the newspaper?”

The advancement of the Internet as a breaking news tool is fabulous, but we are reminded every day that once we post the news of the day, we then prepare it for print.

Typically we don’t report false alarms as news items because it encourages attention seekers, but it is hard to ignore when the City Center is evacuated because of death threats on the city’s entire elected body.

That’s why you’ll find Genelle's and Barbara’s story — accompanied by Sammy Jo Hester’s photos on A1, above the fold today. You can find more content online in the form of video shot by videographer Casey Adams.

As journalists, we rarely find ourselves in the middle of news situations as Genelle was today; but when it happens it reminds us what it must be like for the people we write about.

My thanks go out to all those who were involved in Tuesday’s incident and to those who helped our staff be safe and get timely information to the people of Provo.

Daily Herald executive editor David Kennard can be reached at 801-344-2530 or dkennard@heraldextra.com or on Twitter @davidbkennard.
Posted by davidbkennard at 12:00 AM No comments:

Notes from an Angels Landing rookie 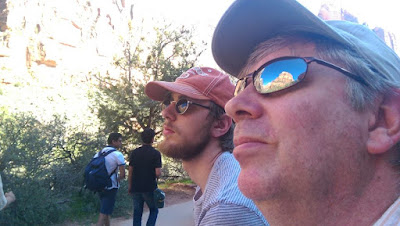 ZION NATIONAL PARK -- The Angels Landing Trail in Zion National Park is the roller coaster of outdoor hikes.
The 2.5 mile trail to Angels Landing takes hikers on a very aggressive, but mostly paved trail 1,488 feet above the Virgin River, which quietly winds its way through Utah’s first national park.
There are two numbers there that are important: 1,488 feet and 2.5 miles. Any fifth-grader putting that on a graph will understand that that’s a steep hike, really steep. Imagine going on a two-mile walk then taking the stairs to the top of the Empire State Building (1,250 feet) or the The Willis Tower in Chicago (1,451 feet), and back again.
READ THE FULL STORY HERE

WATCH THE VIDEO HERE
Posted by davidbkennard at 12:00 AM No comments: