PROVO – Mayor John Curtis said he is welcoming millennials – the population representing the ages of 18-33 – because of the “influence the millennials are having on Provo.”

He points to a recent Bloomberg Business report ranking Provo in second place where for cities where millennials are taking over the housing market.

Millennials, characterized by many as the hip generation, also are making more money than their predecessors, delaying starting families and seeking places with cheaper home prices, according the Bloomberg report.

Provo, which happens to have the highest median home prices where millennials are moving, has another draw, a growing technology sector. According to Bloomberg, jobs in science and technology are luring the 20-somethings away from the big cities they prefer.

“It helps that it costs a lot less to buy in Des Moines, where the median listing price in August was $218,000. (In San Francisco, it was $738,000.) But it's also easy to forget that there are attractive jobs in all kinds of places — about half of jobs in science, tech, engineering, and math are located in the 20 biggest U.S. metros. The rest are in places like Huntsville, Ala., and Lincoln, Neb., cities that offer the appeal of lower costs of living,” the Bloomberg report stated.

So what makes hipsters so attractive to Provo?

- Non-Judgmental: What you wear is not as important as who you are.

- Linear: Executives and staff are fluid in exchange of conversation and ideas. Everything is transparent. The new intern’s ideas are as welcome as the boss with 40 years in the business. In fact,millennial’s may be more important because he or she doesn’t have 40 years of paradigms.

- Media for outreach and to get informed: They get their news when they want it and where they want it. There are no unanswered questions for them.

- Embrace work/life balance: Gone are the strident working hours. Instead, the focus is more on getting quality work done. Art, design, and culture are as integral in the work space as they are at home. It’s about the journey for them.

- Socially conscious: Diversity is important to them and they give their environment more than just idle talk.

- Office setting: They’re not their most productive in a traditional office lay out.

- Digital Natives: They are the only generation for which these new technologies are not something they’ve had to adapt to

- Racial Diversity: Millennials diverse is driven by the large wave of Hispanic and Asian immigrants who have been coming to the U.S. for the past half century.

- Low levels of social trust. Sociologists say this might come from a feeling of vulnerability stemming from racial diversity an lower income levels.

- Economic Hardship: They have higher levels of student loan debt, poverty and unemployment, and lower levels of wealth and personal income.

- Vote for Democrats: Although they claim to be independent politically, they are far more likely than older generations to vote for Democratic candidates.

READ MORE HERE
Posted by davidbkennard at 9:09 AM No comments:

PROVO – A new water year begins on Oct. 1, the date that regional water monitors use to determine how much water will be available for the next year.

On that date, precipitation levels are reset to zero and compared to the previous year.

Regionally, the 2015 water year will likely end on the dry side of normal according to data provided by the National Weather Service.

Data posted today show that since Oct. 1, 2014, 14.9 inches of precipitation fell along the Wasatch Front. That's almost an inch less precipitation than the 15.82 inches the region normally receives. Last year, the region saw just 13.83 inches, a little more than 2 inches less than normal.

Likewise, reservoirs that store water for the coming irrigation year are preparing to receive water. READ MORE HERE
Posted by davidbkennard at 9:35 AM No comments:

Headlines you won't want to miss 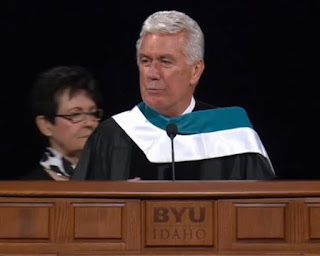 Uchtdorf recovers from wardrobe malfunction
Students were treated to rare moment of unscripted spontaneity Tuesday during the inauguration Clark Gilbert as the new president of Brigham Young University-Idaho. During his remarks, President Dieter F. Uchtdorf, got an on-stage visit from his wife Harriet, who quietly came up behind the second counselor in the First Presidency for the LDS Church to straighten his robe. A little surprised by his wife's stealthy wardrobe adjustment, Uchtdorf quickly recovered saying, “You see, I’m well taken care of ‘at all times and in all places,'” President Uchtdorf said while chuckling. “If President (Thomas S.) Monson would be here he would say, ‘Yes, Harriet, that’s what you need to do.'” SEE THE VIDEO HERE.

Fair weather expected for 50/20 hike
Forecasters are calling for scattered showers today with with thunderstorms possible after noon in some areas around the Utah Valley. Otherwise it will be partly sunny with a high near 69 and a low tonight of about 42, according to the National Weather Service. Friday is expected to bring a high of 68 under mostly clear skies. Scouts hiking in the 50/20 will see fair weather through the night and into Saturday. Friday night is expected dip to 41 degrees. 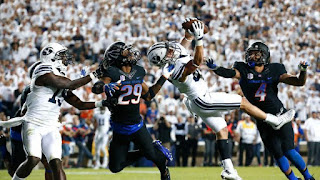 Odds favor UCLA by 14 or more
BYU, ranked 19, faces 10th ranked UCLA Saturday for an 8:30 p.m. game in Pasadena. Most odds makers favor UCLA by two touchdowns or more. Big plays have won the last two games for BYU and you can expect UCLA will be watching for the long pass like the one thrown against Boise State with just 45 seconds left to play last week. Down 24-21, freshman quarterback Tanner Mangum scrambled on fourth down to throw to Mitchell Juergens for the go-ahead touchdown. The game will be broadcast on KSL Radio.

Things you'll want to know about in the next few days
Farmers Market today: The 2015 LaVell Edwards Stadium Farmers Market will take place 3- 7 p.m. Today in the south stadium parking lot. The event takes place on Thursday's through Oct. 29.
Pride Festival Saturday: The LGBT community will gather from 10 a.m. To 6 p.m. Saturday at Memorial Park, 800 E Center St. in Provo for its annual Provo Pride Festival.
Hero Run Saturday: The annual Hero Run to celebrate “everyday heroes” will take place Saturday starting at Kiwanis Park in Provo. Some street closures on Provo's east side should be expected through about noon for the 5K and 10K course. FINDMORE HERE:

Posted by davidbkennard at 6:38 AM No comments:

Planning begins for new I-15 Interchange in Provo

PROVO – Planners met Wednesday to formalize a proposal for a new Interstate 15 interchange at 820 North in Orem.

The interchange would be the third for Provo.

The city and the Mountainland Association of Governments set a target date of adopting the plan for spring 2016. No date has yet been released on when the interchange might be in place.

Further study will include how traffic will effect the area and the possible need of new corridors for future growth of the city.

If built, the interchange would provide better east-west access to the interstate and the city and would help relieve traffic on the neighborhoods along University Parkway and Center Street.

The new access point also would help commercial and residential developments appearing on Provo's east side.

Public comment for the proposal will take place through the winter of 2015.

Posted by davidbkennard at 7:21 AM No comments: 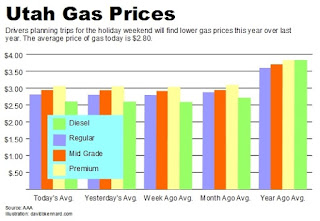 PROVO -- Gas prices around the region remain higher that the rest of the united states, but they are well below prices from this time last year.
Most drivers can find gas for around $2.75 per gallon for regular gas. Filling up a 15-gallon tank would cost $41.25. A year ago that same amount would set you back close to $50 when gas was selling close to $4 per gallon.
According to AAA, prices are higher in western states where prices range from $2.68 to $3.38.
Southern states are selling gas much cheaper from $1.99 to $2.20 per gallon.
Posted by davidbkennard at 8:47 AM No comments:

The percentage of workers without jobs in Utah County and the state of Utah increased slightly in the last two months to 3.3 percent, while the nation's jobless rate remained even at 5.3 percent. 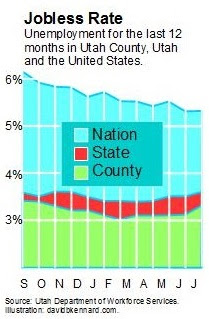 Posted by davidbkennard at 12:09 PM No comments: